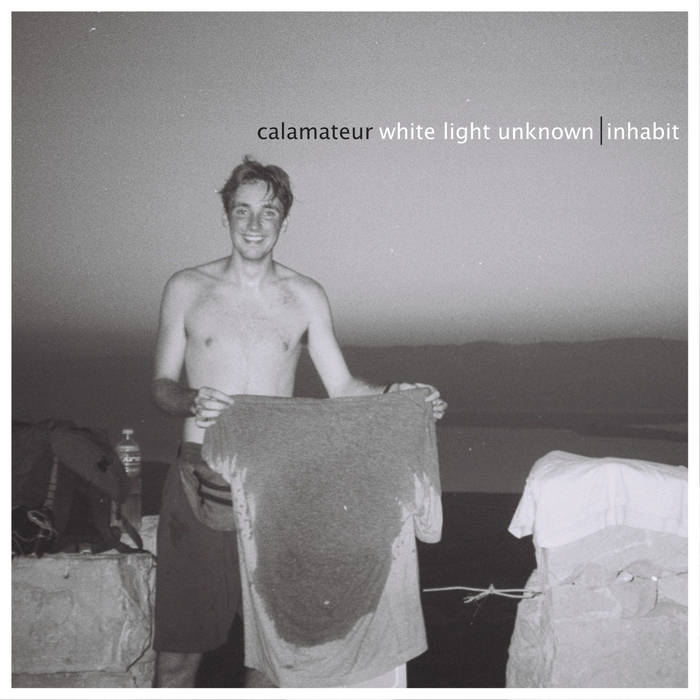 A double-A-side single originally released on 7" vinyl in January 2000.

Here's the original press release, as written by Richard Vernon:

"Calamateur is one boy with a host of talents, a prediliction for pseudonyms and a pocketful of mesmerising and beautifully stark melodies. He also has a helpful friend who likes to be known as Alice Belts. Don't ask. This, Timshel Records first official release plays host to two of those songs. 'White Light Unknown' is a lyrically disturbing trip through some of pop's less charted waters, and a tune which could almost be described as 'catchy'. 'Inhabit' sees Calamateur marry typically frail vocals to delicate acoustic guitar and some of the oddest electronica this side of Japan. David D and his t-shirt are atop Masada at dawn. The new day starts here."

"Astonishing debut single from men of mystery from somewhere in the leafy Glasgow suburbs. 'White Light Unknown' is a haunting (musically & lyrically) little ditty, with just the slightest beat to propel it along. 'Inhabit' is somehow less upbeat, the fragile vocals hardly getting going. We have seen queues of enquiring music fans form at the DJ booth in clubs when this has been played. which is probably some sort of recommendation." - Stuart Mchugh, Jockrock

"…a fine debut from Glaswegian band Calamateur and first release for the newly formed Timshel label. Absolutely no details with this except that it's extremely limited to 100 pressings so purchase on sight because I certainly think that those of you with a love for gentle pop will want a part of this. 'White Light Unknown' features some softly spun acoustics, timidly sparse in approach, nothing too threatening but possessing the kind of delicate use of vinyl grooves that deserves one of those sit-down and contemplate it all moments in life. 'Inhabit' is my personal favourite of the two tracks, slightly more happening here but again providing one of those moments where your head says nothing really out of the ordinary happening here but your heart suggests otherwise, trembling as if touched by something altogether magical. File away with the fragile whispers of Galaxie 500." - Losing Today

"Starting with a delicately picked tune and hushed vocals that recall Elliot Smith’s most sensitive moments, this single gradually grows into a beguiling, bleary-eyed, late-night glory. Seek it out, great things could follow." - Track & Field

"…is a thing of great beauty as their stark acoustic melodies float along with sparse but emotive backing." - The List

"Effortless two-track single from indie collective Calamateur. Soft restrained acoustica is the order of the day with mournful vocals and delicate instrumentation dominating both songs....lovely.” - Boomkat

"Local boys, tho' we don't know any more than that about them, produce this exquisitely beautiful 2-tracker. Lovely almost folky vocals with some gentle acoustic stuff happening in the background. For the Nick Drake fans out there." - Missing Records, Glasgow