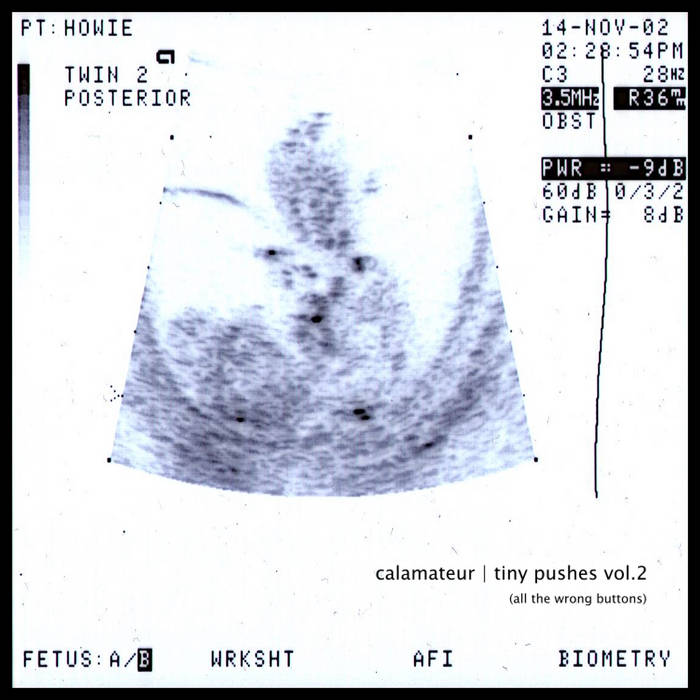 "A free download, they confidently suggest that you feel guilt at their generosity. Certainly, when my pools coupon comes up, I'll be sending Autoclave a cheque. 4.5/5." - Is This Music?

"The songs, however short, pack a real emotional resonance, and their subtle textures remind me of Low... it's cleanly and nicely put together, reflecting - it would seem - a genuine altruism in trying to share some high-quality music with whoever wants to hear it." - diskant

"...full of uplifting beats, textured samples and heartbreaking simplicity... this album exudes confidence and quality in equal measure... there are more ideas in these two albums than Travis or Franz Ferdinand could muster in a year. 8/10." - whisperinandhollerin

Calamateur’s ‘Tiny Pushes Vol.1 (How to be Childlike)’ raised the bar for free music, short songs, and having more ideas in 17 minutes than many earlier artists have had in 3 triple-LP concept albums.

Now, Autoclave Records is proud to announce the imminent release of:

'Tiny Pushes Vol. 2 (All the Wrong Buttons)' shouldn't be free. With all the fuss about illegal downloads, here's a new twist for you - imagine an album so good, so consummately excellent, that even though the artist intends it to be free, you'll feel guilty you haven't paid for it. No really. 'Tiny Pushes Vol.2 (All the Wrong Buttons)', the latest release from the increasingly prolific Calamateur, is that album. Oh, and 'Belong' should be a global hit single. Not free.

Upper — leaning on the mighty backs of Susuma Yokota and classic Aphex Twin it’s a delicious slice of ambient music with one of the oddest vocal samples in recent history.

What is Love? — as well as being the eternal question, it’s an enchanting song very much in the vein of early Lemon Jelly.

Belong — the song for which Howie should make a video. Clearly the man has no desire for fame, since if TP2 wasn’t free over the ‘net, this song’s melancholy melodies would make him a household name. I want this to be a single, so I can own it.

Tick-tocker — the kind of nasty, queasy, lurching distorted electronics you wouldn’t want to hear more than a minute of. The 50 seconds here, therefore, is perfect.

Don’t Understand — the most complete song under two and a half minutes since 'Please, Please, Please Let Me Get What I Want'. When Autoclave finally realise they can make money releasing 'Belong' as a single, this will be the b-side.

Sinewave in My Saviour’s Side — another classic Calamateur instrumental, melodic glitchcore, distressed pastoralism… sparse and wonderful.

Akatombo (The Red Butterfly) — it’s unclear where the original sample is from but suffice it say that this is a wickedly glitched up piece of typically Japanese soundtrack music.

All That I Can Say — a lovely album closer in the vein of 'Don’t Understand'.

And naturally there’s a bonus track, but it’s a bonus track (officially part of 'All That I Can Say', which has three minutes of silence in the “middle”) so I’ll let it be a surprise.

"'Prolific' is a much-used pop phrase but Andrew Howie has got to the stage where he has more songs than time. Previously he used to leave limited edition mini-CDs lying around in service stations and pubs. Now, thanks to the internet, he can leave his music around for anyone who fancies it. Volume 2 raises the bar as it unexpectedly incorporates samples into a few tracks and sets these atop the sparse set of tunes. A free download, they confidently suggest that you feel guilt at their generosity. Certainly, when my pools coupon comes up, I'll be sending Autoclave a cheque. 4.5/5." - Is This Music?

"Far more restrained and almost traditional compared to Tiny Pushes Vol.1, I think I prefer this. It seems to show a more considered approach to songwriting, with a combination of guitar and keyboards delicately mixing with samples and sequencing. The ten songs on here total less than thirty minutes, meaning that none of them outstay their welcome. Whilst Vol.1 seemed to be more about almost random snatches of tune and sound fading in and out of a sometimes messy whole, this is more of a Complete Album: the songs, however short, pack a real emotional resonance, and their subtle textures remind me of Low and, at times, recent Hood records. It's an album which is available free to download, and I can't complain about that value. Not that this is this some kind of quickly knocked-out freebie, it's cleanly and nicely put together, reflecting - it would seem - a genuine altruism in trying to share some high-quality music with whoever wants to hear it." - diskant

"Serendipity strikes again! While researching something totally unrelated on the web the other day, I stumbled across Autoclave Records, the home of CALAMATEUR. A micro label based partly in Beauly, in the north of Scotland, Autoclave seem to be releasing an exciting and eclectic range of titles. As part of Glasgow lo-fi outfit Oldsolar, Andrew Howie has previously met with critical acclaim, but this solo project should, if there's any justice out there, make him a household name. His 'proper' debut album “The Old Fox Of '45” was released early last year, and these two internet-only albums, 'Tiny Pushes Volumes 1 & 2', should cement his growing reputation. Oh yes, and did I mention these two albums are free to download (yes, that's free folks) from the Autoclave website. If that's not incentive enough, I don't know what is. The first collection of songs, 'Tiny Pushes Vol.1 (How To Be Childlike)', comes in at a little over 17 minutes. Although not a lot of time to fit 10 tracks into, Calamateur moves freely between the Mogwai-like post-rock of 'Simpleton' and the highly infectious 'Hey Baby', to the hushed acoustic gorgeousness of 'Everyone Is The One', to the dark instrumental 'Open Your Eyes', which opens with contrasting samples on capital punishment before spiralling into a bass-filled dirge. The recently released second set of songs, 'Tiny Pushes Vol.2 (All The Wrong Buttons)', is a far more accomplished album. As with Vol.1, this collection of songs needs to be listened to as a whole, and although again on the short side (these 10 songs run at 28 minutes) the album is full of uplifting beats, textured samples and heartbreaking simplicity. From the vinyl scratch of the Aphex Twin-influenced opener 'Upper', to 'Nectarine Juice', an acoustic ambient masterpiece, to the truly stunning electro-acoustic ballads 'Belong' and 'Don't Understand', this album exudes confidence and quality in equal measure. 'Belong', especially, deserves further mention. A piano-led masterpiece, in a similar vein to Coldplay's 'Yellow', this track is the obvious single, and if released would surely catapult Calamateur to national acclaim. The album closes with the wonderful 'Akatombo (The Red Butterfly)', which sounds like an ancient electro Japanese nursery rhyme, and the crackling, atmospheric start to 'All That I Can Say' gives way to a string-laden sing-a-long chorus that'll have you swaying along in seconds. Yes, there's a lot of sampling and electronic noodling going on, and the occasional self-indulgent recording quality can irritate at times, but there are more ideas in these two albums than Travis or Franz Ferdinand could muster in a year. Believe me, it won't be long before you're asking yourselves the question: “How come two albums this good are free?” Literally and metaphorically. 8/10." - Leckers, whisperinandhollerin

"When I went hunting for CD's to review I came across a strange little mini CD with a different look to it, the cover was an old picture of a house (Autocity EP), I immediately purchased it for the novelty. This CD turned out to be the product of the extremely talented Calamateur. On further investigation I have found that Calamateur (otherwise known as Andrew Howie) has a large selection of albums, the two most recent are available for free download. After hearing his 'Autocity EP', I quickly downloaded his latest release 'Tiny Pushes Vol. 2 (All the wrong buttons)'. 'Tiny Pushes Vol. 2' is the spawn of random samples, vocals, and acoustic. Lie back and let Calamateur educate you on how you take seamlessly random sounds and skilfully put them together to create something that makes you open your ears and listen. Calamateur's versatility throughout this whole album is a breath of fresh air. One minute it can be ambient and 2 minutes 40 seconds later it will bring you back up with strange screeching noises that actually sound like they're supposed to be there, then right back to ambient land!! This is a fantastic album, you can relax to it, or go about your normal business, this album fits all moods. Calamateur has many more albums that equally express his talent and ability to arrange noises and sounds together to make great music. Get it and enjoy it!!" - kookin.co.uk