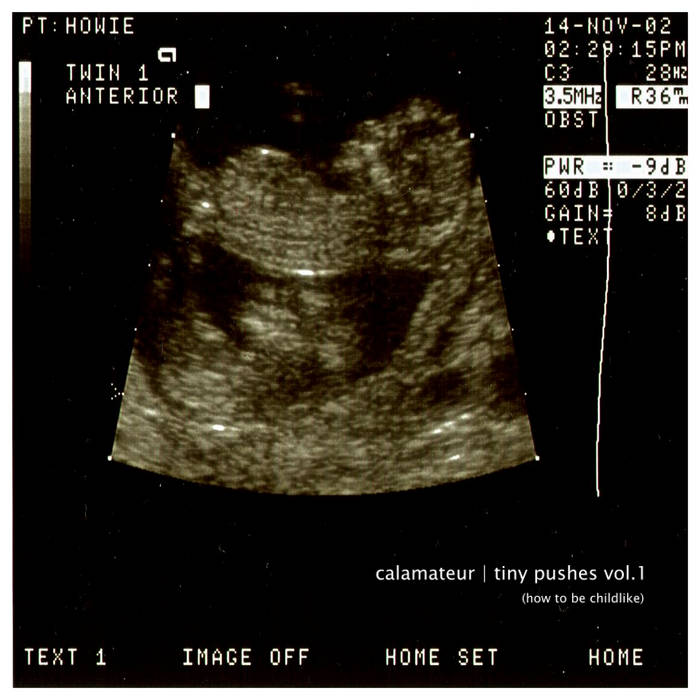 10-track mini-album originally released as a free mp3 download on Timshel Records and Autoclave Records in May 2003.

"...at 17 minutes in total you can hardly go wrong... short and sweet, like a Highland Guided By Voices." - Is This Music?

"...best listened to as a whole...interspersed with passages of vaguely electronic, vaguely dreamlike strangeness...an interesting listen which makes me want to hear more..." - diskant

"...moves freely between the Mogwai-like post-rock of 'Simpleton' and the highly infectious 'Hey Baby', to the hushed acoustic gorgeousness of 'Everyone Is The One', to the dark instrumental 'Open Your Eyes'..." - whisperinandhollerin

"You can see this collection of short pieces by Calamateur (aka Andrew Howie) as many things, most obviously as a collection of partial songs, snowy scans of half-formed, embryonic concepts. The ten tracks were, after all, recorded on an old four-track and range from the frail electronica of ‘Three Point Turn’ through to the battered acoustic distortion of ‘Hey Baby’ and ‘Simpleton’, incorporating childhood recordings, samples from documentaries, and Playstation beeps ‘n’ clicks along the way. Rather than seeing it as a random scrapbook of sketches, though, you can hear Tiny Pushes Vol.1 as a careful assemblage of fragments that build to a surprising and beautiful whole - very short movements in a successful suite.

Inspired by the lo-fi warts-and-all recordings of the likes of Sebadoh/Sentridoh and originally intended for release on 7" vinyl, Andrew rapidly made the financially smart - and far more democratic - decision to make 'TIny Pushes Vol. 1: How To Be Childlike' available for free download instead (no pressing costs, and anyone who would like it might actually stand a chance of finding it). In 2003 it was a bit unusual for a record label (or two, in this case) to give away music, especially music the creator and labels were proud of. We were proud of this music. We still are."

"I have to be honest with you. I have no recollection about where this first CD by Calamateur, called ‘Tiny pushes vol.1 (how to be childlike)’, came from. As good a place to start as any though, eh? Weirdly, although this is a CD, this whole collection is available to download for free here. Hey, don’t worry too much about big slow download times either, because the whole ten songs clock in altogether at only around seventeen minutes. It’s worth downloading the whole lot too, as some of the tracks individually are cut-up snippets and fragments of random samples and sounds, and so it’s best listened to as a whole - the more ’song’-like tracks (which, even then, are only glimpses of ideas) being interspersed with passages of vaguely electronic, vaguely dreamlike strangeness. It’s hard to get a grip on where Calamateur are at, but from this selection, they seem to exist in a world of half-asleep-yet-heartfelt acoustic songs in a suitably lo-fi style. They remind me of tapes which people used to put out in the old indiepop/underground cassette days, ideas committed to magnetic tape before too much refinement comes into play. An interesting listen which makes me want to hear more - hopefully, their invention and reluctance to submit to traditional songwriting rules is carried throughout their other work." - Simon Minter, diskant

"Congratulations are due, to the recipients of the ITM? stamp of value and quality this month. Following their almost harrowing Autocity EP, Calamateur been busy. The 10 tracks here are all downloadable and at 17 minutes in total you can hardly go wrong (John Peel's a fan if you needed any further convincing). In fact this works as a set - fragments of found sound link together the more tunesome songs here such as the simple but mightily infectious guitar strum of 'Three Point Turn'. Other highs include the almost-metal riff of 'Simpleton' which again is 'just' guitar, but all-powerful. 'Hopscotch' is like a lo-fi Durutti Column with beatbox, and 'Everyone is the One' is a lovely acoustic song, short and sweet, like a Highland Guided By Voices.” - Stuart McHugh, Is This Music?

"Serendipity strikes again! While researching something totally unrelated on the web the other day, I stumbled across Autoclave Records, the home of CALAMATEUR. A micro label based partly in Beauly, in the north of Scotland, Autoclave seem to be releasing an exciting and eclectic range of titles. As part of Glasgow lo-fi outfit Oldsolar, Andrew Howie has previously met with critical acclaim, but this solo project should, if there's any justice out there, make him a household name. His 'proper' debut album “The Old Fox Of '45” was released early last year, and these two internet-only albums, 'Tiny Pushes Volumes 1 & 2', should cement his growing reputation. Oh yes, and did I mention these two albums are free to download (yes, that's free folks) from the Autoclave website. If that's not incentive enough, I don't know what is. The first collection of songs, 'Tiny Pushes Vol.1 (How To Be Childlike), comes in at a little over 17 minutes. Although not a lot of time to fit 10 tracks into, Calamateur moves freely between the Mogwai-like post-rock of 'Simpleton' and the highly infectious 'Hey Baby', to the hushed acoustic gorgeousness of 'Everyone Is The One', to the dark instrumental 'Open Your Eyes', which opens with contrasting samples on capital punishment before spiralling into a bass-filled dirge. The recently released second set of songs, 'Tiny Pushes Vol.2 (All The Wrong Buttons), is a far more accomplished album. As with Vol.1, this collection of songs needs to be listened as a whole, and although again on the short side (these 10 songs run at 28 minutes) the album is full of uplifting beats, textured samples and heartbreaking simplicity. From the vinyl scratch of the Aphex Twin-influenced opener 'Upper', to 'Nectarine Juice', an acoustic ambient masterpiece, to the truly stunning electro-acoustic ballads 'Belong' and 'Don't Understand', this album exudes confidence and quality in equal measure. 'Belong', especially, deserves further mention. A piano-led masterpiece, in a similar vein to Coldplay's 'Yellow', this track is the obvious single, and if released would surely catapult Calamateur to national acclaim. The album closes with the wonderful 'Akatombo (The Red Butterfly)', which sounds like an ancient electro Japanese nursery rhyme, and the crackling, atmospheric start to 'All That I Can Say' gives way to a string laden sing-a-long chorus that'll have you swaying along in seconds. Yes, there's a lot of sampling and electronic noodling going on, and the occasional self-indulgent recording quality can irritate at times, but there's more ideas in these two albums than Travis or Franz Ferdinand could muster in a year. Believe me, it won't be long before you're asking yourselves the question: “How come two albums this good are free?” Literally and metaphorically. 8/10." - Leckers, whisperinandhollerin

thanks to lindsay, deans, jonathan, richard, mum & dad, nicola, caroline, gran-in-law, mark, sarah, fred, and 'music 2000' for the playstation one.