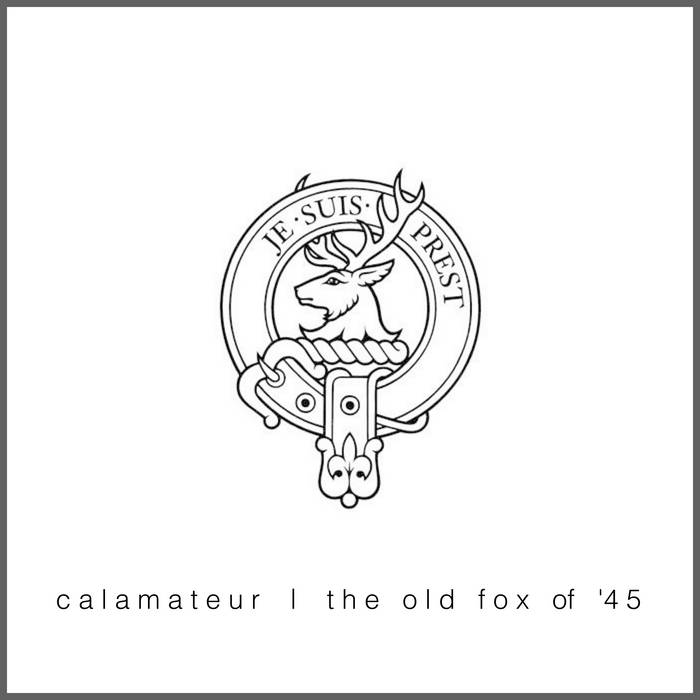 Steve Lawson A favourite album of mine for over a decade. Loved it when it came out, love it now. An old friend, a comforting blanket, and part of my history. A great record in a catalogue loaded with great records. Favorite track: Hold Your Stare.

The debut album from Calamateur, originally released on Autoclave Records in July 2004.

"...the aim is true and the heart is strong in this beautiful little record. 4/5" - The List

"simply another triumph... an enthralling listen" - Is This Music?

I'm trying to get my head around a press release for Calamateur’s latest offering. It sounds awesome, and typically Andrew - which is to say an eclectic and effective mix of pop sensibility, avant-gardism, noise, prettiness, acoustic fragility, electric muscle, harmonies and crackly samples. Let’s try this on for size…

Autoclave Records (Brooklyn and Beauly) is proud to announce the imminent release of the debut album from Calamateur:

'The Old Fox of ’45' is the 5th and most recent collection of songs from Calamateur, the band’s 3rd release for Autoclave Records, and it's debut full-length album. Released under his Calamateur moniker, 'The Old Fox of ’45' is publicity-shy Andrew Howie’s most assured and accomplished offering to date. This time he’s even allowed us to see his name on the credits and a relatively distinct photograph of what (we can only assume) is the man himself looking at a CD booklet. The stylistic range is just as eclectic as ever, taking in underground rock, experimental electronica, post-folk and distressed pastoralism; but there’s no hiding behind effects, no posturing. This is the sound of a man coming out of seclusion.

'The Old Fox of ’45' follows the release last year of the double-length EP 'Son of Everyone' and marks a departure from its predecessor’s delicate acoustic stylings. The music sweeps assuredly from all-out rock ('Half Truth') to acoustic guitar strummery ('Desperate Days') to far gone and out electronic experiments (a cover of The Blue Nile’s 'Automobile Noise').

The album art is mostly derived from the family crests of the Lovats and the Frasers, two historically significant families in Beauly; the place Andrew and his wife call home.

'The Old Fox of ’45' kicks off with the post-Pumpkins rock of 'Half Truth', a gloriously catchy song with a monster riff, and the dying trace of a sample from a comedy album of prank calls. In a sane world we’d be seeing this live on Top of the Pops next Thursday. This is the kind of song that makes kids want to start bands.

'Automobile Noise' is a blistering cover of one of The Blue Nile’s most accomplished moments. Howie doesn’t stray much from the original’s polished/raw vocal delivery, but the arrangement is an entirely new beastie. Lush orchestration is totally replaced by combative layers of vicious industrial noise swathed in the best and scariest use of digital distortion we’ve yet heard. A winner.

'Hold Your Stare' blends acoustic guitar, treated vocals and electronica to produce a poignant atmosphere of distressed pastoralism. An acoustic version of this song appeared on the 'Son of Everyone EP' (CLAVE004).

'Son of Everyone' is a reworking of the lead track on last year's EP of the same name. This is a much poppier take than the EP version and includes ‘80s keyboards, synthesized strings and a chunky electric guitar.

'Here Beside' is shinier than the “quick and dirty version” heard on last year’s 'Son of Everyone EP' but retains all the quirky charm of the original which, you have to admit, is a pretty cool trick to pull off.

'Your Rescue' swings the mood down again; weary and somewhat resigned, yet spurning bitterness for hope. Musically the song lunges unexpectedly from a soft and wistful acoustic into aggressively loud electronica and back again. It’s also one of Andrew’s best vocals, with a gorgeous falsetto and harmony.

'Universal Rehearsal': imagine you live on Sirius and like to listen to earth-style hard rock. By the time the radio transmissions make their way across the light years and through the ion storms, it probably sounds like this.

'Desperate Days': “I want to run away with you” says it all really. One of the great songs of love/fear of action.

'Your Only Friend'; fear, anguish, pretty guitar, distorted drums, ominous rumblings, great tune. “I can’t be your only friend”. What a way to close an album. Genius.

Andrew Howie lives in an abandoned portastudio on the muddy banks of the Beauly Firth in the north of Scotland. He makes up songs using pieces of driftwood and the corpses of dead birds. Strange men steal them away in the night while he’s digging for scallops or sleeping on the old couch behind the eight-track. In the morning he has no songs and has to start all over again. Sometimes he dreams that he’s actually married, living in a nice two storey flat over a mini market and has turned the spare bedroom into a high-tech recording studio. Since it rains a lot in Beauly and the roof of the portastudio leaks, he usual wakens from these dreams to find his face is wet and the song stealers have left the door open again.

When he records as Calamateur the dance is always along that line of tension between intimacy and distance. The emotional territory mapped out is an exploration of the longing for safe harbour constantly at odds with the desire for self-protective independence.

The fruits of Calamateur’s previous labours have been heard on BBC Radio 1’s John Peel show, Late Junction on BBC Radio 3, Madrid’s Cielo Liquido as well as local radio the length and breadth of Scotland. Reviews are found liberally scattered across the web and in various high falutin’ music journals. There should be a sheet of impressive quotes attached here, but if you bother to look at the calamateur dot com website, or read online reviews at Amazon, Norman Records, Rough Trade, and so on, you can read them in context and realise we weren’t just extracting the juiciest lines. It really is fair to say “Critically Acclaimed”. So we do.

"Based in the Scottish countryside, released on the miniscule Autoclave label, Calamateur's stunning album is a work of beauty that deserves to make Autoclave very rich people indeed. What took Snow Patrol's 3 albums and 4 people to accomplish, Calamateur's Andrew Howie manages straight off with songs of desolate beauty underpinned with a savage hope. Shivering, yearning epics, as sublime as his Blue Nile cover is it's not the best song here by any stretch. Buy it. 8/10" - Planet Sound (Channel 4 Teletext)

"Eclectic and more than occasionally brilliant, Calamateur is the work of one Andrew Howie, a lo-fi Scottish songwriter of no little talent. This is his first full-length release and it is peppered with great moments, from the Mogwai-meets-New Order of opener 'Half Truth' to the achingly fragile Sparklehorse crackle of 'Won't Last Forever'. Throughout 'The Old Fox of 45', Howie blends inventive instrumentation with simple melodies and a dreamy vocal to create a record which is both atmospheric and intimate. The pace is lethargic, but the aim is true and the heart is strong in this beautiful little record. 4/5" - The List

"It's hard to find superlatives to describe the music of Calamateur. Not because they're hard to come by, they've simply been used up in previous reviews! This, the first full-length album from Andrew Howie, is simply another triumph. With Calamateur less of an Oldsolar side project now, the stripped-down sounds are still as thrilling as ever. The album actually starts with a full band - 'Half Truth' creates a massive sound driven by pulsating New Order-style bass and an almost singalong chorus. There's a cover of the Blue Nile's 'Automobile Noise' here too, with an overloaded beatbox driving what's almost a one-man dance remix. The Blue Nile comparison was one I'd never made before but whether it's the voice, or the at times sparse production I can't be sure, but at times The Old Fox seems like it might contain some long forgotten/destroyed demos from the legendary Glasgow trio. There's a couple of songs from their previous album - the title track from 'Son of Everyone' is given more bells and whistles in the new production but 'Here Beside' retains the starkness of the original. The jarring percussion on 'Your Only Friend' slowly drags an enthralling listen to a close. I can only echo the words of Jim Bowen : "Super smashing great"." - Is This Music?

"Calamateur's CD album, 'The Old Fox of '45', is a lot less strange than 'Tiny Pushes Vol. 1', the only other work I've heard from them. Having said that, it's still pretty strange, if for no other reason than the incredible diversity of styles it encompasses. The first three tracks take in assured and polished REM-style melodic rock, noisy and glitchy vocal electronica and effortlessly swooning acoustic sadness. So it goes on, swinging from style to style, but never losing the core qualities of a confident voice, tuneful compositions and sharp, clean production. At times that clean production threatens to sap the soul from the music at times, but that's just the view of somebody with a slightly twisted and illogical view of independent music." - Diskant

Thanks to Lindsay, Richard, Mark & Heather.

For all I know.