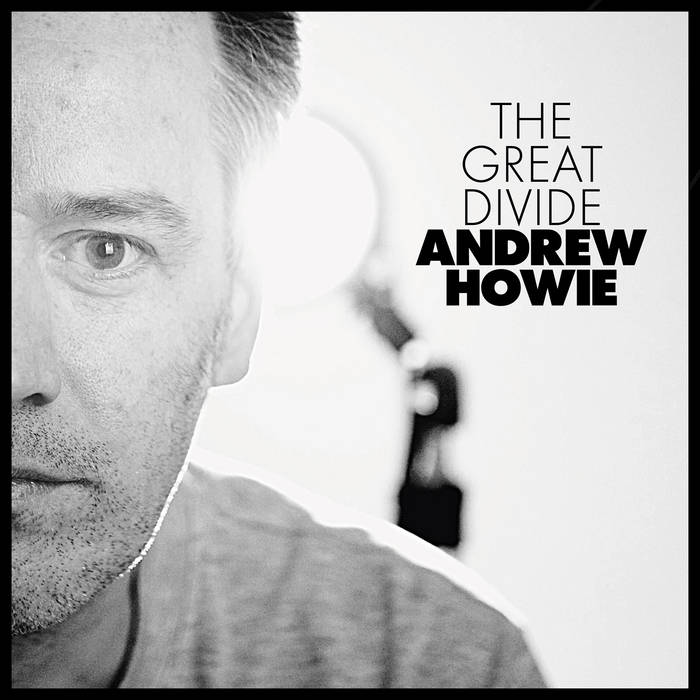 Fergus McNeill Hard to pick a favourite song on this beautiful album. Songwriting that is as challenging as it is accessible as it is enduring: that must be the song-writer's Holy Grail... Clearly Andrew Howie has been drinking from that cup! Favorite track: The Fury And The Sound.

Steve Lawson I've been a fan of Andrew Howie for longer than I care to remember. As a musician, writer, thinker and human being, he's an inspiration, and his music just gets better and better. I have an unreleased all acoustic version of this album, which was already in my favourite albums of the year. This more produced version is at least as brilliant if not more so. Everything about it is great. Seriously. Favorite track: Time On My Side.

Daniel Borsos Songs like Arab Spring, Time On My Side, and Victory are some of the best songwriting you will hear - technically perfect and emotionally packed. Favorite track: Arab Spring.

Andrew Howie has been quietly making music as Calamateur since 2000, from his John Peel endorsed early releases through to his critically acclaimed later albums 'Each Dirty Letter' and 'The Quiet in the Land' (the former featuring the sublime duets with Jo Mango 'Retreat', and 'Change This World', as heard on BBC3's drama 'Lip Service'). As Calamateur, Andrew also contributed vocals to songs on the first two albums by Scottish collective The Grand Gestures.

After taking a break for a couple of years to concentrate on gaining an MA in songwriting, as well as working in Scottish prisons, schools and community groups running songwriting workshops, he's now ditched the Calamateur moniker and is writing, playing and releasing music under his own name.

Why ditch the pseudonym? "It just doesn't feel right anymore," says Andrew. "When I started making music the stage-name was something for me to hide behind. It's time for me to step out from behind the mask and learn to be comfortable in my own skin".

His debut (if we're allowed to call it that!) album is the soon-to-be-released 'The Great Divide', preceded by the single 'The Fury and the Sound', co-written with acclaimed Scottish singer-songwriter Yvonne Lyon. The single is backed with an unexpectedly upbeat, but haunting, cover of Nirvana's 'I Hate Myself And Want To Die'.

Other than Yvonne Lyon's gorgeous contributions of piano and backing vocals on four of the album's ten tracks, multi-instrumentalist Andrew performed, recorded and produced the album himself in his home studio. After carefully selecting and fine-tuning the bare bones of the songs (while discarding more than a few along the way), he crafted the sonic landscapes and arrangements over the course of a year to produce an album that is at once immediate and slow-burning. It is, without a doubt, his most assured offering yet - a long-player of meticulously crafted songs that unashamedly deal with the deeply personal (but universal) themes of uncertainty, conflict, parenthood and doubt, as well as the chasms (hinted at in the album title) that often exist within our everyday lives: between the people we want to be and the everyday reality of who we are, between the beliefs we publicly profess and the doubts we privately struggle with.

"Dropping a stage moniker and putting your own name up front and centre is clearly a big move for many artists but given the personal nature of many of the songs on The Great Divide by Andrew Howie, it would possibly be strange if he continued to play behind his Calamateur title. Howie’s rich and warm vocals are the standout feature of the album, nestling comfortably on top of sparse acoustic guitars and modest electro twitches and tweaks. It’s an album that feels pretty comfortable and confident in its own skin, rarely changing pace or over-extending itself. As is often the case, this is the album’s big strength and if not quite its weakness, it’s certainly a fact that perhaps diminishes the overall impact of the record. This is emphasised by the way that ‘Dead Ringer’ leaps out of the speakers and provides you with a refreshing blast of tempo and vitality. It is not as though it would trouble any Dutch Gabba enthusiasts but it’s got some power and passion, with a really poppy hook. A few more songs like this on the album would have given the record a tremendous balance and allowed the slower paced tracks to stand out more as opposed to blending into one. The individual songs are all decent in their own right and if you listen to tracks on shuffle or here and there, there’s a lot to like on The Great Divide. What it does, it does very well, it just may have been better if there was a bit more to what is on offer. There’s talent on show here and if you like taking things at a slower pace, you’ll find plenty to be pleased with this album."
- Is This Music?

"Long-time readers of Cross Rhythms will remember Scotland's enigmatic Calamateur and now the Stirling-based songsmith has released this self-penned and self-produced under his own name. 'The Great Divide' is a richly-layered and textured sonic soundscape of confident vocals, sparse acoustic guitars, synths, keyboards, fragile beats, distortion and electronic bleeps. Howie is joined by the critically acclaimed Scottish songstress Yvonne Lyon on piano and backing vocals for four songs. The lyrics are not cliched; deeply personal and achingly honest - the spiritual element though not being overtly obvious; intertwined throughout as Howie brings his questions, doubts and hurts to God; ultimately offering hope. "Arab Spring" with chugging guitars and distortion is an attempt to get into the head of someone with a different viewpoint of life. "Post" is a thought-provoking, stripped-down piece of earnest electronica railing against "evangelical certainty" - potentially controversial to some. "Dead Ringer" with heavy guitar riffs is the most up-tempo number here. "Annie" is a beautiful epic; a tribute to Howie's grandmother who recently passed away, sampling a Japanese choir singing "Softly And Tenderly" and her voice. An eclectic, absorbing, skilfully-executed album from a talented, inventive artist."
- Cross Rhythms

'The Fury And The Sound' written by Andrew Howie and Yvonne Lyon.

Piano and backing vocals on 'The Fury And The Sound', 'Time On My Side', 'Paper Thin Walls' and 'Victory' by Yvonne Lyon @ www.yvonnelyonmusic.com