Son of Everyone EP 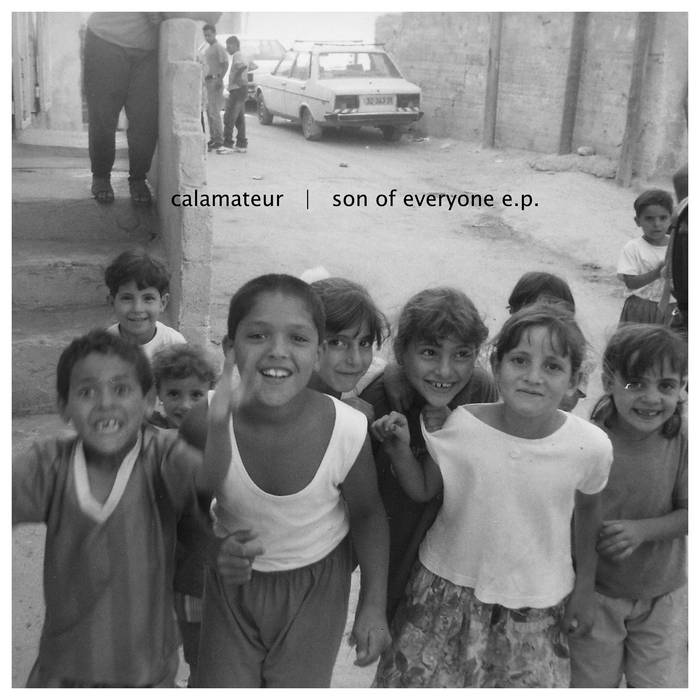 "...writes as though guided by voices, massaging his words through a voice as swoonsome and melancholic as the finest American roots singers...ideal for late night listening, even at lunchtime. 4/5." - Logo Magazine

"...nothing short of brilliantly absorbing...the stark production only adds to an impressive set of eerie 'folk' tunes." - Is This Music?

The ‘Son of Everyone EP’ (CLAVE004) is a full-length album (exactly 45 minutes, or one side of a C90 cassette) released on Autoclave Records. We call it an EP, even though it's full length, and we're selling it at mid-price album rates. It's also 9 songs long, even though it claims to be only 8 tracks.

Background:
Here's how it works; Calamateur have released the beautiful pastoral balladry of the ‘White Light Unknown / Inhabit’ 7", the disturbing and distressed electronica of the ‘Autocity EP’ (on hand-packaged mini-CD only) and the internet only mp3 mini-album ‘Tiny Pushes Vol.1 (How to be Childlike)’. A considerably warm critical opinion has greeted each collection of songs thus far. A full length, full-on album (‘The Old Fox of '45’) is in progress, but Calamateur and the label both felt the need for a release which reflected the live show and which would be available in time for Calamateur's three appearances at this year's Greenbelt Festival. Thus, the ‘Son of Everyone' EP was born.

The EP:
Although this is a 45 minute, 9 song album, it's an EP in our eyes because it has obvious lead tracks in the shape of ‘Son of Everyone’ and ‘Here Beside’ with a strong supporting cast of instrumentals, alternate takes, outtakes, etc. 'The Old Fox of '45’ is a more albummy album, whereas this is a generously cut EP. That's how we are at Autoclave. We like our quality control set to maximum, and so do Calamateur, so we're all happy. This is a sharp collection of great songs, which go together well and will whet your appetite for more. More is imminent.

The Songs:
'Son of Everyone' - is taken from the forthcoming autoclave album ‘The Old Fox of '45’. Crying out for radio play.

'Here Beside (cheap & dirty version)' - an alternate recording of the song. A more polished version will be on the album. This one, like its predecessor, is a pretty obvious radio pick.

'Reply All - a delicate guitar instrumental inspired by a four-way (and ongoing) email conversation.

'Walk or Run - a heartbreaking gossamer thing full of aching, longing and a dark undercurrent of blood and pain.

'Talitha K' - people who like story songs love this one, people who like quirky songs with proper tunes and unexpected arrangements and instrumentation really like it too; so everyone's a winner, baby. Yes of course it's got a weird name for a reason.

'Hold Your Stare (acoustic version)' - an alternate take of a song slated for future release. This is familiar territory to long-term fans of Calamateur; haunting, haunted, pretty, odd - "distressed pastoral", we like to call it. A peach.

'Disappointed' - melancholia, even more distressed and pastoral than ‘Hold Your Stare’. Gorgeous.

'Shame' - how good will ‘The Old Fox of '45’ be? Well, 'Shame’ was deemed not quite good enough to make the final cut, that's how good. This should be on the radio too.

'This Silence' - musically this harkens back to the days of ‘Inhabit’, with acoustic guitar, burbling electronica and found sound. It's starkly atmospheric and full of a disappointed and confessional yearning. This could easily be on Peel or Late Junction. So emotionally raw it's almost painful to listen to, you may feel intrusive.

The Band:
Calamateur is the work of one Andrew Howie. He likes to pretend that you all think he's a fully fledged band full of people with peculiar names, but there y'go. It's all Andrew, all of the time, except for the bits which other people helped him to do and for which they always get credit. Andrew is also half of the duo at the heart of critically acclaimed Glasgow dreamcore outfit, Oldsolar.

"Not many EP’s clock in at forty-five minutes, that’s a whole album in old (vinyl) money, still fewer can fill each of those minutes with interest. More remarkable still is that Calamateur is the work of one pair of hands, those of Andrew Howie. He shares an outlook, if not a sound, with Ed Harcourt, and he shares a sound (if not an outlook) with the likes of Damien Rice and Josh Rouse. Confused? Don’t be, Howie is a simple man who writes as though guided by voices, massaging his words through a voice as swoonsome and melancholic as the finest American roots singers, yet his basic palette includes not just acoustic guitars but also a light drizzling of understated electronics. Ideal for late night listening, even at lunchtime. 4/5." - Logo Magazine

"It's as if acoustic music in Scotland, once the preserve of wooly-pullovered real ale-quaffing beardies, has been liberated. Rejoice! Because while actual folk music done well is a rarity, alternative songs done on acoustic guitar are exploding all around us. theonewhoflew, Ally Kerr and even Aereogramme can all captivate an audience with some spellbinding stripped-down songs. Joining this group are Calamateur, last spotted making atmospheric soundscapey samplefests, but the 8 tracks here are nothing short of brilliantly absorbing, indeed on 'Here Beside' you forget it's just one man and a guitar. with reverberant haunting vocals and occasional augmentation by keyboard, the stark production only adds to an impressive set of eerie 'folk' tunes." - Is This Music?

"...fellow weegies Calamateur are bolder still. Their 'Son of Everyone' EP is not only ludicrously long at 45 minutes (OK, lets call it a mini album then, though a fair chunk of the running time is silence) but it still manages to be bloody good with it, coupling alt. country strumming with tortured lyrics 3/5." - The List

"Another local CD (9 song EP!) that I've had for a few weeks. On first airing, I must admit I thought "mmm, interesting production" on hearing the mix of raw electro-acoustic guitar and (home) studio electronica noodlings and soft chorused vocals. Then I thought "mmm, actually comes across as a pretty straight singer/songwriter that's managed to dress up some pretty M.O.R. pop-ish songs". Then I came back to it a little later and allowed myself to be drawn into Andrew Howie's relaxed yet earnest and melancholic world. And Iwas put in mind of Elliot Smith (famous in part for contribution to the Oscar-nominated soundtrack to Good Will Hunting). I dug out my copy of Smith's 'Either/Or' album to see if it was a fair reference. The following day I found out that Elliot Smith had died just 72hrs earlier. Made the comparison somewhat poignant. Probably significant is that Calamateur's songs contain more hope - both lyrically and musically. 2nd track 'Here Beside' stands out as a song that could see Calamateur move into the 'coffee table' market - I'm not sure if he desires that or not. I'm inclined to a) see him play live and b) watch this space." - Inverness City Advertiser

"...less rock, but more in the way of some acoustic introspection, comes courtesy of Calamateur who provide some heartfelt & earnest alternatives to all those noisy guitars that clog our ears. Here we have an 8 track CD E.P. on Autoclave, with a mini LP coming soon on the quality Shingle Street imprint. Eric Matthews & a mellower Death Cab For Cutie spring to mind as loose reference points for all you who give a damn, man." - Norman Records

"8 track mini CD from Calamateur and it is full of stark acoustic melodies that float along with sparse but emotive backing. Think somewhere between the Clientele, Elliott Smith and the Fence Collective." - Rough Trade

‘reply all’ is for derek who is “...(to screwtape's chagrin and worse) creaking onto my knees each night....”