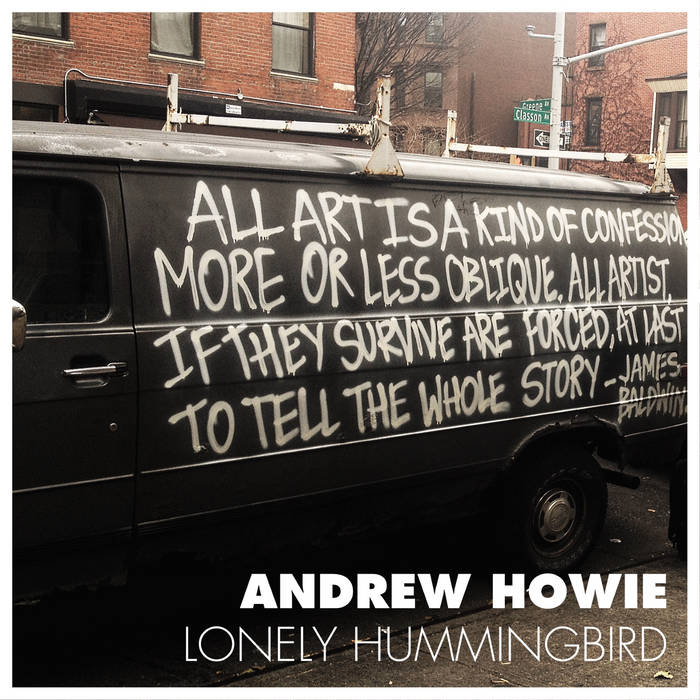 Dann Chinn @ Misfit City Whether recording as Calamateur or as himself, Andrew Howie's always been a master of achingly lovely songcraft, of mood, and of atmospherics that cover everything from fresh air to swarming electrical storm. This isn't the first time he's married all of these elements together, but this record's additional joining of his own Scottish ballad leanings with the richness of the American country song tradition is absolutely breathtaking.

Michael Mathy check all the tags in this beautiful album. it completely describes very well all the diversity of this album.
And if someone says me she/he did not listen to "Sugar coat" at least three times in a row, I will say "LIAR" ! Favorite track: Sugar Coat.

Jo Wilson A fantastic fusion of Andrew's poppier tunes and some lovely synth sounds from his ambient stuff. This feels like one of his most coherent records - in that all the songs fit well together and the album flow really works well.

Particularly enjoying Nickajack (the music, and lyrics that are close to home at the moment), Culnakirk Hill (familiar subject matter as we embark on faith discovery with our nearly-5-year-old who just wants lots of Right Answers), and the jam out of Sugar Coat. Favorite track: Sugar Coat.
more...

In late 2013, as part of a Masters Creative Project I was undertaking at the University of the West of Scotland, I travelled to the USA to work with five songwriters based in Philadelphia, New York, Washington DC and Nashville.

The title of my project was: "In what ways does the collaborative process challenge, influence and change the creative practice of the confessional songwriter?"

At each songwriting session I presented my co-writer with an incomplete song I had written from a 'confessional' point of view (i.e. personal and diaristic in nature). We then attempted to finish the song, transforming the writing process from a solitary venture into a collaborative effort.

After returning home, I recorded demos of all the co-writes, handing in a 10-track album and a 5000-word contextualisation as my finished project (for which I *just* scraped an A). Having had my fill of academia for at least one lifetime, I took a big step back from the whole project, leaving the dust to settle on it for over 18 months. After recording and releasing 'The Great Divide' and 'Scars Are Like A Beacon' (my last 2 albums) I felt the time was right to return to these songs.

The process of re-visiting, tweaking and re-recording this album has not been an easy one (and could have been another Masters project all by itself) but, for me, the experience has become much more than just the creative-process-challenging academic exercise it started out as back in 2013. As well as being a document of my journey to the States (found-sounds recorded on my trip are liberally scattered throughout the record), the songs on this album explore the themes of self-doubt and writer's block (Sugar Coat and Dirt), loneliness, individualism and the meme of the solitary genius (Companion), my love of Johnny Cash intermingled with a friend's experience of depression (Nickajack), self-sabotage (Standing Up Tall), and my old friends doubt and post-evangelicalism (Culnakirk Hill and Testament). Two key influences on the lyrics were Carol Craig's book 'The Scots' Crisis of Confidence' and 'Stages of Faith' by James W. Fowler.

"The origins of Stirling-based singer-songwriter Andrew’s latest album (having previously recorded as Calamateur) came from his Masters project at university a few years ago, where he brought half-fi nished songs to like-minded musicians such as Amy Allison and Denison Witmer to see how collaboration altered things. The result is a mix of beautiful acoustic tracks and inventive electronica, filled with insightful lyrics of loneliness and self-doubt. Best moments are Sugar Coat, Nickajack and Testament."
- Scottish Daily Express

Thank you to Amy Allison, Bill DeMain, Rebecca Pronsky, Steve Taylor, Denison Witmer and Andy Zipf for taking the time to write with me. Thank you to Richard, Andrea, Esme, Anita, Julie, Dan and Drew Ann for your friendship, hospitality, advice and transport. Lastly, thank you to Lindsay and the kids for letting me run away to the States for two weeks.