Jesus is for Losers 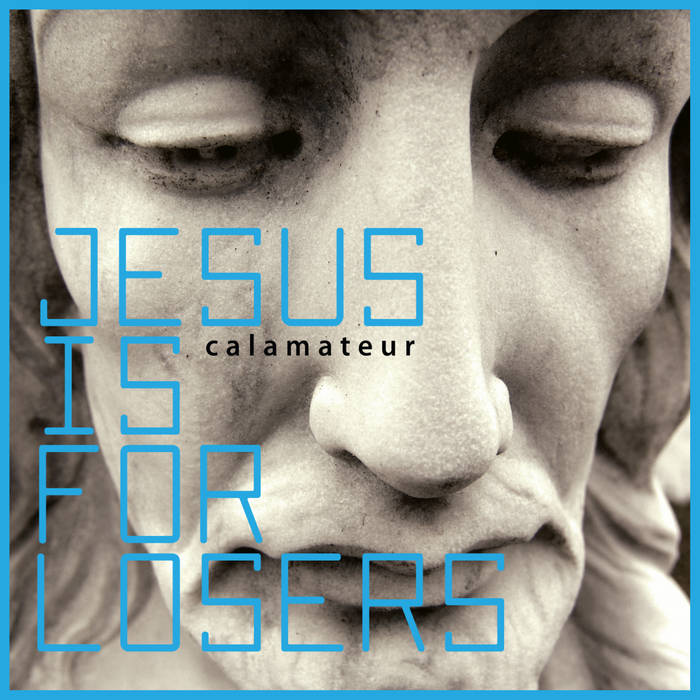 11-song album of covers and originals, originally released on Autoclave Records in March 2009.

“The world needs mavericks like Calamateur….this latest offering is typically brimming with invention and considerable skill…it’s utterly engaging and heartfelt… 4/5.” – The List

“It would be too easy, given that Howie has chosen the tunes and arranged them himself, to suggest that his own material is better than that of Bono and American Music Club. But from the blatant pop of ‘Lonely Boy’ which combines gospel and football terrace chant, to the fantastic ‘Talitha K’, Howie himself constantly comes up trumps, putting the covers in the shade. They always say that the devil has the best tunes, but I’m not so sure.” – Is This Music?

Calamateur is singer-songwriter / general-noise-maker Andrew Howie’s recording moniker. Based for the last few years in the Highlands of Scotland, Andrew has been recording and releasing his own music since 2000.

One look at the album’s track-listing and you'd be forgiven (no theological pun intended) for thinking it was simply an album of songs about Jesus (historically not the best career move for a singer, Dylan’s “Saved” and Cash’s “Gospel Road” spring to mind). Listen to the record though, and you’ll find a stunning collection of painfully honest songs exploring abandonment, failure, disillusionment and the need to question our inherited values.

Jesus is for Losers features five original Calamateur compositions – including a depiction of a one night stand with the alleged son of God – juxtaposed with covers of songs by American Music Club, Zwan, U2 and The Velvet Underground. The album has had a slow-trickle release to members of Calamateur’s mailing list over the past few months. The final 3 tracks will be released on the 9th March.

A nine-page digital booklet and full artwork is included.

"The world needs mavericks like Calamateur. Holed up somewhere outside Inverness, Andrew Howie has been making a find blend of folk, rock and electronica for almost a decade, with this latest offering typically brimming with invention and considerable skill. A concept album of sorts featuring covers of songs about Jesus and a handful of original tunes, it’s utterly engaging and heartfelt, from the bluesy stomp of ‘Lonely Boy’ to the heartbreaking cover of ‘I Don’t Know How to Love Him’ from the Jesus Christ Superstar soundtrack. Yes, really. The whole album is available free from www dot jesusisforlosers dot co dot uk, a donation nets you a bonus five-track EP. Do it now." - The List

"To take the time to listen to this album is to take the time to become totally spellbound by it. Where there are albums in your life that you play and listen to without ever really affecting you, this is an album that truly takes over and plays you, with a soulful, intimate sound of longing and despair that many bands of the moment could only aspire to. The singer has a powerful emotive voice that is effecting on both his own compositions and on cover versions from sources as diverse as Andrew Lloyd-Webber, The Velvet Underground, U2 and, on the classic song which gives the album its title, Steve Taylor. With an eclectic mix of deeply relaxing, atmospheric backings and more raucous accompaniments, it is clear that Calamateur, otherwise known as Andrew Howie, is a very special talent and it is little wonder that his music is turning heads in the industry. This is a collection of powerfully honest songs that will compel you to wake up and take stock. Highlight tracks are 'I Can Hear Her Breathing', 'Talitha K', 'Wake Up Dead Man' and the haunting title track." - Cross Rhythms

"So, if Jesus is just a Spanish boy’s name, why have so many dedicated tunes to him – and I’m not just talking the Songs of Praise crew. On this unusual and free-to-download album, Andrew Howie has gathered together versions by some of the more credible Christ songs as well as a few surprises. The good news first – this is no ‘Saved’ (Bob Dylan’s all-time-low) but there have been stabs at putting JC into a rock context – from Broken Family Band’s Jesus Songs, to Hefner’s wee series of ‘Hymns’ to Alcohol and Cigarettes, as well as Breaking God’s Heart. Hell, even Godspell had its moments. Calamateur’s homage isn’t all strictly religion either, more examining human nature and faith – so there are originals such as ‘White Light Unknown’ which deals with suicide, and a punked-up ‘Perfect Moment’. However, it’ll be the covers that are of most interest – even if these two are a match for anything else here. Lloyd Webber’s ‘I Don’t Know How To Love Him’ is well, odd – it’s hard to get round the fact that Howie’s vocals sit where Elaine Paige’s should be, and this takes the communion wafer for most bizarre track here (or indeed, pretty much anywhere). The U2-penned ‘Wake Up Dead Man’ is one of the better ones here, beating Zwan’s ‘Jesus, I’ hands down, while the stripped-back version of the Velvets ‘Jesus’ – not one of the band’s finest moments – doesn’t lend too much to the album apart from a kind of completism and the sense that there’s something here that’s definitely not one from the hymnbook. It would be too easy, given that Howie has chosen the tunes and arranged them himself, to suggest that his own material is better than that of Bono and American Music Club. But from the blatant pop of ‘Lonely Boy’ which combines gospel and football terrace chant, to the fantastic ‘Talitha K’, Howie himself constantly comes up trumps, putting the covers in the shade. They always say that the devil has the best tunes, but I’m not so sure." - Is This Music?

All songs written, performed, engineered, produced and mixed by Andrew Howie except:

Thanks to Steve Lawson for the Roland U-8 and to Mark Jones for the PC. I wouldn’t have been able to make this album without your generosity. Thanks to Mark Hilditch, Phil Moir, Hannah Clyne, Al MacInnes and Iain Hutchison for helping out.