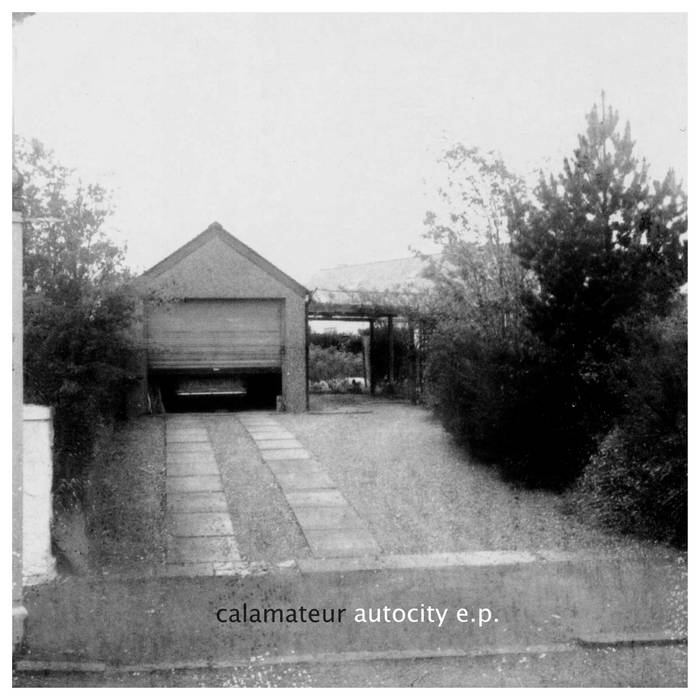 Steve Lawson A favourite Calamateur release of mine for many, many years. Love this and all its weirdness and atmosphere. Favorite track: Driscoll.

"...a quite beautiful quartet of ‘tunes’... droning synths, muttered voices and hazy street noises woven into a criss-cross of finely spun guitar patterns... there is a fresh and inspiring feel to it all that all the new year colonic irrigation in the world couldn’t shift." - The List

“...4 pulsating tracks on a 3” cd which somehow mimic engine noise, while samples of crash death statistics interplay in a cursory warning on the evils of the automobile...so spooky that it seems it would soundtrack a space shuttle crash..." - Is This Music?

Limited to 200 copies, each handmade & individually numbered in a sealed envelope.

one copy was kept by me.

one hundred and seventy nine were available to buy.

five were given to specifically chosen dj’s/journalists

the remaining fifteen were distributed at various locations, from the scottish highlands down to the south of england, over the period of the 12th to the 29th december 2002.

the full list of locations where copies of the ep (no.’s 2 to 16) were left, for anyone to find, is as follows:

"A very small package arrived at The List offices the other day that put some colour back into Surface noise’s pallid complexion. Inside was an immaculately packaged 3in CD from an outfit calling themselves Calamateur. The Autocity EP is a quite beautiful quartet of ‘tunes’, the kind that would be branded ambient by less considerate souls - ambient in that there isn’t a sha-la-Ia chorus or drum solo to be heard, but instead, droning synths, muttered voices and hazy street noises woven into a criss-cross of finely spun guitar patterns. Hardly brand new l’lI grant you but there is a fresh and inspiring feel to it all that all the new year colonic irrigation in the world couldn’t shift. More than this, the makers have distributed 15 of the discs in variety of public places - in airports, on buses, at service stations, a list of which will be posted on the Calamateur website soon - and you could do well to keep and eye out for one, or better still make for your local quality record store and ask for it by name. Oh and while your there buy the new Flaming Lips single and a copy of that rereleased Board of Canada Album Twoism: you won’t regret it. - The List

"Beautifully packaged 3" CD limited to just 200 copies from Calamateur who come from the suburbs of Glasgow. The four tracks are totally bleak soundscapes with spoken word samples on top. This could easily sit on Constellation or on a Clientele single." Rough Trade

"The second concept record about driving this month but this one is clearly not in favour of our mechanical friends. 4 pulsating tracks on a 3” CD which somehow mimic engine noise, while samples of crash death statistics interplay in a cursory warning on the evils of the automobile. Snippets of radio chat on traffic build up through the CD – ‘Bad Day’ features a description of the state of a collided car until the inevitable ‘Farstar’ is reached – actually so spooky that it seems it would soundtrack a space shuttle crash until an American statistician (of course) kicks in equating highway death tolls to those in ‘nam.” - Is This Music?